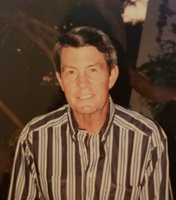 Graham, Robert “Bob” C., 79, of St. Petersburg, FL passed away peacefully after a courageous 16 year battle with Parkinson’s on November 10, 2018 at Suncoast Hospice Mid-Pinellas Care Center.  A celebration of life service will be held at 1pm on November 24, 2018 at Anderson-McQueen Funeral Home, 2201 Dr. ML King Street North, St. Petersburg, FL.  Bob was born in San Antonio, TX; raised in Chicago, IL then lived in St. Petersburg, FL since 1976.  He was preceded in death by his father Robert C. Graham Sr., mother Arlene Graham and brother George L. Graham.  Bob is survived by his devoted wife Susan of 40 years, a loving caregiver through his many years of illness with an amazing capacity to comfort him.  No request of Bob’s was ever too great for her to grant, she tirelessly worked to keep him comfortable.  He is survived by his sons Robert C. Graham III, Steven Graham (Denise), and Adam Joshua Graham; three stepchildren Shannon Hayes Negro (Paul), Kimberly Suzanne Hayes (Pam), and James William Hayes Jr.; step-grandson Zachary James Hayes.  Bob was employed by General Employment for 25 years, a national employment firm with whom he was top salesman for the majority of his tenure.  These prestigious awards won him many trips to Hawaii, Bermuda, Jamaica and Bahamas.  After retiring from General Employment he formed an engineering and IT recruiting firm, Bob Graham and Associates, Inc.  He worked with equal tenacity and took pride in his firm and appreciated the business relationships he forged.  In his retirement he enjoyed traveling, spending time in the mountains of North Carolina, golfing and just enjoying nature.  Bob played golf and racquetball with a close group of friends and accomplished a rare 4 holes-in-one in his lifetime.  He had such a kind spirit, touched many lives and will be loved and missed by all.  In lieu of flowers, memorial donations may be made to Suncoast Hospice Mid-Pinellas Care Center at 6770 102nd Ave., N, Pinellas Park, FL 33782 or Parkinson’s Foundation online or mail to 200 SE 1st Street, Suite 800, Miami, FL 33131.