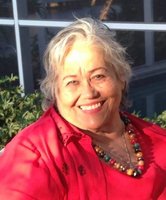 Rosa Angelica Rodriguez, or as many knew her, “Happy,” passed away peacefully in St. Petersburg on August 2, 2019 at the age of 85. Rosa was born on September 29, 1933 in Managua, Nicaragua to the late Adan Espinosa and Rosa Castellon.

Rosa spent 5 years in the Convent in Nicaragua where the nuns there wanted her to remain, but she was determined to travel the world. She later worked as a Registered Nurse for over 40 years until her retirement at 65. Rosa was always on the frontlines, either assisting in the ER or ICU where she was never afraid to lend a hand. She had even worked for an American Company in the Panama Canal where she helicoptered patients to triage units. Throughout her nursing career, Rosa’s success was propelled by her innate kindness and desire to help others, constantly giving 100% of herself to those in need.

Outside of work life, Rosa was part of St. Raphael’s Council of Catholic Women where she helped raise donations for the church’s new facilities. She also dedicated her time to the homeless, making sandwiches and providing resources to those in St. Petersburg. In her spare time, Rosa loved reading and writing poems, enjoyed swimming and fishing, and was very fond of all animals and wildlife. She particularly liked horses having been raised riding them, as well as monkeys as a result of her time growing up in Costa Rica. Rosa also raised dachshunds and her last baby, Rachel, lived until the age of 17. More than anything, Rosa’s greatest joy was spending time with her family and making others smile. She brought the best out of everyone she came in contact with, truly believing laughter to be the best medicine of all. Her career path and natural maternal instinct coupled to make her the most loving and caring individual a patient, friend, or family member could ask for. Larger than life and one in a million, Rosa will be dearly missed by everyone who had the opportunity to know her.

Rosa is survived by her daughter, Carmen Marlowe and son-in-law, Pat; granddaughters, Jessica Icerman and her husband Jason, Megan Greene and her husband Billy; great-grandchild, Raleigh; as well as many other family and friends.

She was predeceased by her son, Marco Antonio Rodriguez, and her 9 brothers and sisters of which she was the youngest.

A Visitation will be held on Friday, August 9th from 10-10:30am with her Funeral Service to immediately follow, all at Anderson-McQueen Funeral Home, 2201 Dr. MLK Street N, St. Petersburg, FL 33704. Rosa’s Committal Service will take place after the service at Calvary Catholic Cemetery in Clearwater. In lieu of flowers, donations may be made in her memory to the COPD Foundation at https://www.copdfoundation.org/Take-Action/Donate/Make-a-Donation.aspx.