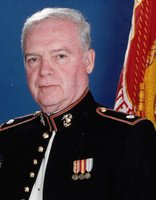 Lieutenant Colonel Robert L. Fletcher (“Fletch”), 89, a long-time resident of St. Petersburg, FL passed away peacefully at St. Anthony’s Hospital on May 27.  He is survived by his loving wife of 39 years, Donna Fletcher; two sons -- Jonathan H. Fletcher (daughter-in-law Hai Thi Nguyen) of Vancouver, and Bradford B. Fletcher of Colorado Springs; his sister Nola Martin Gray of Hatteras, NC; and several nephews and nieces including Robert E. Martin, Jr. (Joanne) and sons Harry and George; Robin Boots; and Diane Martin-Kelly (Ron).  Along with his family, he will be missed by former client and longtime friend Warren Keyser (Cathy) and his poodle, Memphis Belle.

After graduating from the Norwich Free Academy, Fletch attended Tufts College in Somerville, MA, joining the ROTC program and enlisting in the Marine Corps in 1953 where he served three years Active Duty plus 25 years in the Reserves.  A lifelong student of history and all things military, he was initially drawn to military life by WWII submarines launching in Groton, CT, saying “I watched them leave almost every day. At age 12, I knew the men on board were the real heroes. I grew up in a Gold Star Family, mourning the loss of my uncle, Robert O. Fletcher, during WWI.  My future brother-in-law, Robert E. Martin, Sr. served on the Intrepid during all of WWII.  I partnered our family’s lengthy history of service, researched by my mother, Nola Leffingwell Fletcher, a genealogist, with my study of 20th Century military history.”  Fletch’s extensive experience, devotion to his troops and understanding of current events guided him throughout his military career.   One of his last assignments was sharing training he received at the US Naval War College in Newport, RI, specializing in counterinsurgency.   His military service was framed by his belief, “When in command, command.  You’re not paid to be liked; respect is enough.”   Even after his time in the Marine Corps, he continued to embrace ties to being of service.  Having an early interest in Air Force and Marine Corps Aviation, he pursued this at the age of 50, getting his pilot’s license and joining the Civil Air Patrol and Albert Whitted Historical Society where he volunteered for over 15 years.

Fletch’s business career started at Citibank – a fixed income trader working with international institutional clients. While raising a family, working full-time, and serving in the Reserves, he attended night school at NYU, earning an MBA. For forty years, his resume grew as he moved through many Wall Street firms and banks. While the list is long and companies disappeared through mergers and acquisitions, friendships remained and always seemed to bring forth connections to the next opportunity.  Fletch continued to work part-time until retiring in St. Petersburg.  However, staying home didn’t last long and he eagerly answered the call when the Florida Holocaust Museum reached out to him.  There he melded his organizational talents with a deep understanding of the Museum’s mission – to “teach the members of all races and cultures the inherent worth and dignity of human life in order to prevent future genocides.”   In their spare time, Fletch and Donna enjoyed Florida Orchestra concerts, the Broadway season at the Straz Center and frequent trips to art museums.

A service of remembrance is planned for 10:00am Wednesday, June 16 at Anderson McQueen Funeral Home, 2201 Dr. M.L.K St N.  Friends will be received one hour prior to the service.  A webcast of the service will be available on Fletch’s online obituary page. A military funeral at Sarasota National Cemetery is scheduled for 10:00am Wednesday, June 23.   In lieu of flowers, please donate to the Florida Holocaust Museum Education Dept, 55 5th Street S, St. Petersburg, FL 33701 or to Southeastern Guide Dogs - Veterans Programs, 4210 77th Street E, Palmetto, FL 34221.

“Love many things, for therein lies the true strength, and whosoever loves much performs much, and can accomplish much, and what is done in love is done well.”