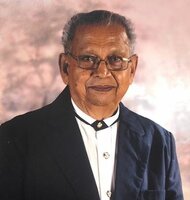 Henderpaul Coomar passed away on Saturday, February 5th, 2022 at his residence in Largo, Florida, surrounded by his family. He was a beloved husband, father, brother, uncle, grandfather, and great grandfather.

Paul was born on January, 6th, 1931, in Prospect, East Coast Demerara, Guyana. He was the 3rd eldest of 11 siblings. He was a successful businessman in Georgetown, Guyana, then later moved to Canada. Paul enjoyed his travels around the world, especially the warmer destinations. This lead him to settle in beautiful Florida, where he created his own Guayanese Paradise garden.

Paul would devote his mornings with prayers and then spend endless hours planting fruit trees, vegetables, and pepper plants. If he wasn't in the garden, he was definitely watching cricket. Paul loved his Indian, West Indian, and traditional devotional music. No matter how old Paul was, his sons could never out dance him.