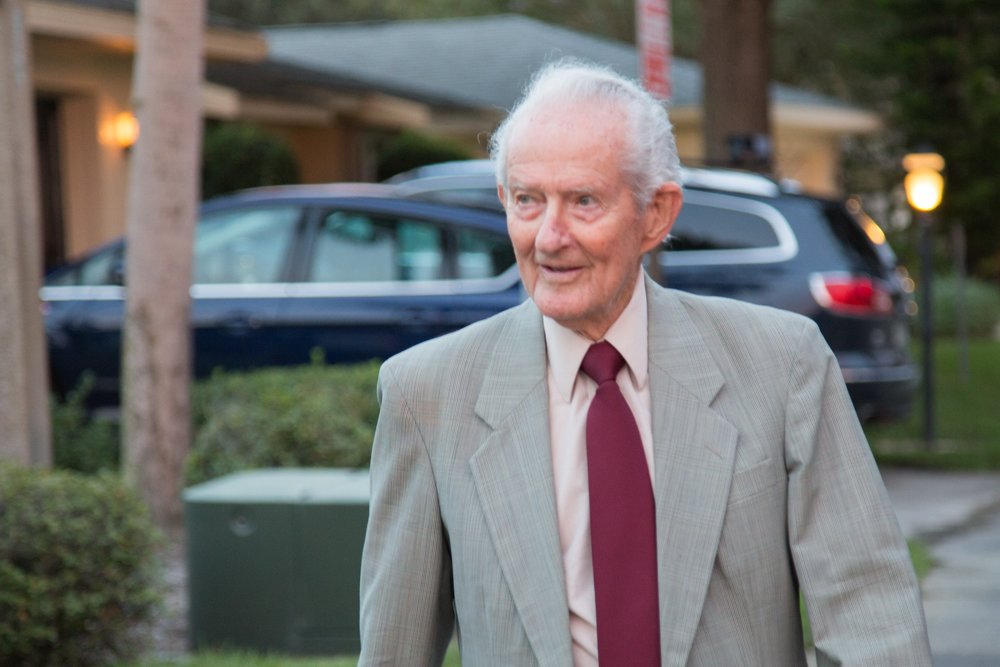 Ray was born in St. Petersburg, Florida on January 1, 1921, and grew up watching pro baseball teams hold spring-training, sneaking out to watch games, while playing baseball, football, basketball and golf, some with his big brother, James, at St. Petersburg High School, where he graduated in 1941.

In 1942 as World War II ravaged Europe, Ray enlisted in the US Army Air Forces and trained to work as a RADAR tech specialist – then a brand new technology and a top-secret word.  Radar allowed our forces and allies to instantly know which planes were the good guys – crucial to our victory (called IFF, Identification Friend or Foe.)

He was sent on the Queen Elizabeth troop ship to the 8th Army Air Force Division, 361st Fighter Group, 374th Fighter Squadron, in Bottisham, England (outside Cambridge).  From there, he worked on radar gear on the ground and in the planes, including the new P-51 Mustangs.

Mid-1944, their unit was moved to Little Walden, England, and on Christmas Day, 1944, they were airlifted to a former German Luftwaffe air base in Saint-Dizier, France.  Their unit’s purpose was to fly top cover during the Battle of the Bulge, the last major German offensive.  Cold and snowy, he recalled barely being able to dig foxholes in the icy ground.   In Feb.1945, they were transported to Chievres, Belgium, and in April went back to England, leaving for the USA on November 4 on the Queen Mary (which was used as a troop ship) after victory was secured.  He received citations for his part in the European air offensive, D-Day (the Battle of Normandy), the Battles for the Rhineland, Ardennes and Central Europe.  Medals received included Good Conduct, EAMETO, ATO, and the World War II Victory Medal.

He quickly set out to marry the girl he left behind in St. Pete, Marno Elizabeth Thornton, marrying on June 2, 1946.  They soon made their home in a trailer at the University of Florida, where he graduated in 1949 with a Bachelor’s degree in Business Administration and their first son, Don.   This was the start of a die-hard Florida Gator family that lasted the rest of his life, and continues through his four children and many others who carry that Gator tradition.

He soon landed a job with Florida Power Corporation (now Duke Energy) in DeLand, Fl, as a salesman who also aided with downed power lines during storms.  He quickly moved up into management as the district manager in New Port Richey, Fl.  A few years later, they moved him to the main office in St. Pete, where he worked in government relations in Tallahassee and Washington DC, and finished his 36-year career with Florida Power as Director of Public Affairs in 1983.

His daughter, Janie, had become a golf professional by that time, and he used his early retirement to caddy for her on the LPGA Tour.

Each summer, Ray and his wife went up to the family’s rustic summer cottage in Cedarville in the Upper Peninsula of Michigan.  Its idyllic setting on Lake Huron created magical memories for the extended family, and does to this day.

Ray’s parents came from south Georgia to St. Pete in the early 1900s, where his father, Benjamin Franklin Sirmons, worked on the now-extinct trolley cars that ran downtown. His Mom (Pearl) and Dad were devout Christians, and Ray, his brother and 5 sisters lived true to their faith at Woodlawn Presbyterian Church.  Ray and his wife were founding members of Riviera United Methodist Church in northeast St. Pete, which started in Riviera Junior High School and continued as they built two sanctuaries, the second after the first one became too small.

He was a Lay Leader in the Methodist Church, and found himself preaching from the pulpit more than a few times.

Marno, his devoted wife of over 60 years and a loving housewife and mother, passed before him on March 1, 2007, at 84 years old.

Funeral service will be at Riviera United Methodist Church in northeast St. Petersburg, with visitation at 9AM, funeral service @ 10AM, and committal at Memorial Park afterwards.   A memorial celebration of Ray’s life will follow.

To send flowers to the family or plant a tree in memory of Raymond Sirmons, please visit Tribute Store
Saturday
21
July