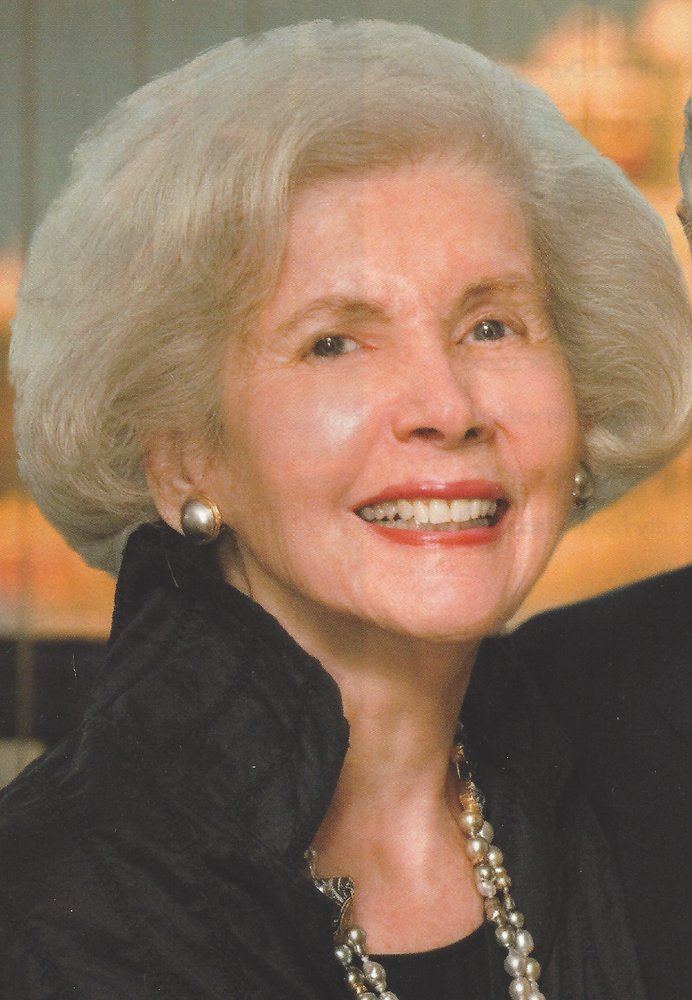 HOUGH, Hazel Clarkson, namesake of the Hazel Hough Wing of the Museum of Fine Arts, wife, and philanthropic partner of William R. Hough, passed away at age 92 on August 3, 2019. Throughout her life, Mrs. Hough volunteered for numerous organizations, including lifelong service at the MFA, and was a founding member of the Palladium.  As a native Floridian, she had a passion for Florida history, reading books on Florida history and culture, giving these books as gifts to her children and grandchildren, and in 2012 played a large part in establishing the Hough Family Chair in Florida Studies at USFSP.  She is survived by Bill, her loving husband of 68 years; their three children, Robb (Susan) Hough, Susan (Pat) Henry, and Helen (Dave) Feinberg and grandchildren, Will, Bonnie, Mansie and Michael Hough and Alexandra Feinberg.

Daughter of Florida native Julian Livingston Clarkson and Hazel Lamar of Atlanta, Georgia, Mrs. Hough was born in Miami on May 26, 1927, a second generation Floridian, moving to Fort Myers at the age of four. Developing an interest in journalism, Hazel served as substitute Society Editor for the Fort Myers News Press in high school, and went on to major in Journalism at Florida State University. Displaying a talent for singing, she performed with the Fort Myers High School Glee Club, the Women’s Chorus at Florida State College for Women (later FSU), and with two friends formed the “Swing Triplets”, a trio that performed frequently for school functions, military dances (1942-45), and community events. In 1947 Hazel was crowned “Queen of Edisonia”, the Fort Myers Pageant honoring the city’s most prominent resident, Thomas Alva Edison. Immediately following graduation from FSU in 1949, she went to work for Davison’s (Macy’s) in Atlanta, but missing the warmth of the Florida sunshine, accepted a job with Burdines in Miami a year and a half later.

While visiting her family in Fort Myers, an acquaintance named Bill Hough invited her to a midnight dance. The two fell in love, and were married four months later on April 7, 1951. The Houghs made their home in St. Petersburg where Bill had recently relocated and established a brokerage firm with Fred Beil (Beil & Hough).  Within a couple of years Bill and Hazel had built a mid-century modern house that still stands, and it was there that their three children were born and spent their early childhood. With a talent for decorating, Hazel played a large part in the planning and the conceptualization of this house.

From the start of their marriage Mrs. Hough became involved in the volunteer community. Her first volunteer work was with the YWCA where she joined the Board and later became President.  In 1955 she was invited to join the Junior League, and sang and played the ukulele for the  “Junior League Music Makers”, a group that performed a “Hootenanny” for each of the public schools every year. A personal musical high point for Hazel was being accepted into the Suncoast Opera Chorus in 1965 for their performance of “Carmina Burana”.  In the 1980’s she continued her singing with the choir at St. Peter’s Episcopal, a prestigious choir that toured and sang in some of the great Anglican cathedrals of England.  From her various performing experiences, Mrs. Hough could see the need for a midsize performance venue where community groups would have the opportunity to perform. In 1998 The Houghs were part of a group who purchased a hall, renovated it, and became founding members of the Palladium. They later gifted it to St. Petersburg College, and the Palladium continues to shine as a community theater and performance hall.

When the Museum of Fine Arts opened in 1965, Mrs. Hough became a member and frequent visitor, and in 1972 joined a Docent class mainly to learn more about art, but found she enjoyed seeing children in her tours develop a love for art. In 1980 Hazel was elected to the MFA Board of Trustees where she served several terms, and in 1986 was asked to chair the Education Committee helping to design the precursor to the Art Mobile program that took art education into the schools.  The Houghs later became members of the Collector’s Circle, helping the MFA with new acquisitions.  Mr. Hough gave the lead gift to build the new wing that would become “The Hazel Hough Wing” (2008), a well-deserved honor for his wife, honoring her years of service and contributions to the MFA.

Mrs. Hough became “Community Relations Director” for William R. Hough & Company, negotiating sponsorship opportunities with area nonprofits, including WEDU, helping the family business to gain area wide exposure while at the same time supporting many charities.   During the 1980’s Hazel had been president of the (Morean) Arts Center Board, and in the 1990’s established William R. Hough & Company as the founding sponsor of the “The Word and Image Program”, a partnership between the (Morean) Arts Center and the Public Schools (K-12), an ongoing program that encourages verbal and artistic creativity as a combined medium.

Hazel enjoyed the volunteer work she did for all of the organizations she served. The Houghs’ evenings were filled with events at the Palladium, American Stage, the Florida Orchestra, the MFA, the Dali, Canterbury (where all their grandchildren graduated), various Board meetings, and dinners with friends and family.  They loved to travel; they spent time in Aspen every summer for over 30 years, refreshing themselves with the daily classical music, and they travelled worldwide with SIBF (the Society of International Business Fellows), in support of economic freedom.  She was a devoted wife, mother, grandmother, friend, and enthusiastic supporter of the St. Petersburg community.  She will be deeply missed.

In lieu of flowers, gifts may be made to any of the organizations mentioned above or to the Cathedral Church of St. Peter. A public gathering to visit with family will be held at the Palladium on Wednesday, August 14th from 5:30-7:30pm. A memorial service followed by a Reception will be held at the Cathedral Church of St. Peter on Saturday, August 17 at 10:00am.

Share Your Memory of
Hazel
Upload Your Memory View All Memories
Be the first to upload a memory!
Share A Memory
Send Flowers