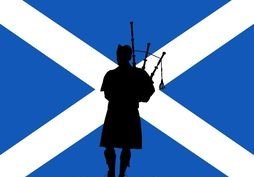 John "Jack" Gilbert Robertson, passed away on August 26, 2019 in St. Petersburg, FL. He was born in Bedford, Ohio on March 26, 1931. He was preceded in death by his father, Gilbert Robertson; mother, Nancy Morrison; and wife, Kay Mealy. He leaves his wife, Joan; sons, John (Edie), and Keith; step-daughters, Lea Bussmann and Heather (Brian) Marks; and grandchildren, Jennifer and Kevin and their mother, Jackie Robertson, and Savannah Marks. He served as a Seabee in Adak during the Korean War and worked as a bricklayer and mason and in city services in Solon, Cleveland Heights, and Shaker Heights. He was a member of Solon Masonic Lodge 757, the Solon AMVETS, Seabee Island X-9, and South Shore Cruising Club. Jack was a piper with the Cleveland Kiltie Band, the St. Andrews Pipe Band in Dayton, and several bands in Florida. He was a member of the Scottish-American Society in Akron and the St. Andrews Society in Dayton. Because of his love of bagpiping, he established a full scholarship for pipers at the Ohio School of Scottish Arts. He and his wife Joan played bagpipe and fiddle together for many events. He enjoyed traveling, and in retirement, they volunteered in state parks in Florida, Georgia, and Texas for 17 years. He leaves many friends in Ohio, their winter home of Zephyrhills, Florida, and the Masonic Home of Florida in St. Petersburg. In lieu of flowers, donations may be made to the Jack Robertson Piping Scholarship (Write Checks to: The Cleveland Foundation), 1746 Dover Center Rd, Westlake, OH 44145.

To be held privately at Florida National Cemetery