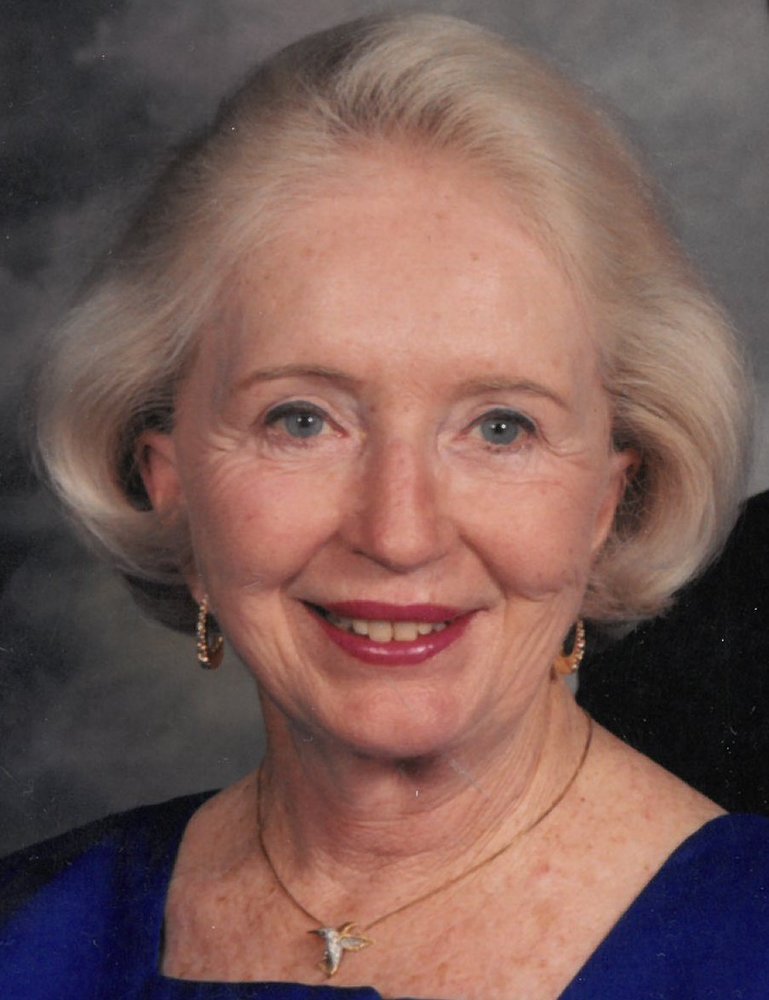 Fleece, Joanne McCartney, beloved wife, mother, grandmother and great grandmother died at home  Sept. 21, 2019 surrounded by her family,
Mrs. Fleece was a civic leader, a community volunteer and an educator and mentor. A life long resident of St. Petersburg she was  the second baby born at St. Anthony’s Hospital on November  29, 1931 , She was the only child  of Ardelle Lindsey and Curtice B. McCartney, She attended local schools and was a 1949 graduate of St. Petersburg High School.  Then onto Florida State University  where she majored in the classics  and was a member of Delta Delta Delta sorority. While at St. Petersburg High School, she started dating a classmate Joseph W, Fleece Jr.Mr. Fleece, attended the University of Florida and for two years the couple alternated weekends between Tallahassee and Gainesville. As a St. Petersburg Debutante, Joanne could not be engaged at the time of her debut on December 26, 1951, As soon as the ball was over Mr. Fleece asked her to marry him. They were married on  June 28,1952 and this year celebrated their 67th anniversary. After their marriage Joanne continued her studies at the University of Florida  where she received her degree in education.  The Fleeces were Gator football fans and not only attended all of the home games for over 60 years they followed the Gators on the road and to many Bowl Games. In 2003 they were inducted into the Grand Guard Society of University of Florida Alumni.The society celebrates the rich history of The Gator Nation and honors alumni who have reached their 50th year as UF alums. Following graduation, Mr.Fleece started law school at the University of Florida and when Stetson University moved its law school to Gulfport, they couple moved back home to St. Petersburg. For the early part of their marriage, Joanne was busy raising her family and volunteering  She served as president of both the Junior League of St. Petersburg, and the YWCA of St.Petersburg. She was always beautifully groomed with a ﬂair for fashion and was among the ﬁrst to be honored by the Woman’s Service League  at their annual beneﬁt . She was named to  the league”s Hall of Fame. Joanne took her interest in education further when she went back to school and received a master’s in education from the University of South Florida.  An advocate for seeing children of all ages in the public school receive guidance counseling she began a 16 year career  in the Pinellas County School System. at Maximo Elementary,  Not only did she offer professional expertise , she also served as a  volunteer in the Doorways Program where she mentored students from middle through high school. When the Fleeces were not busy with their active careers they traveled. Europe, Asia, Alaska,  Africa were part of their travel itinerary, In recent years Mrs. Fleece was a life member of the Stuart Society of the Museum of Fine Arts and served as president of Town and Gown of the University of South Florida,St. Petersburg,
Mrs.Fleece was an avid gardener.She loved her yard and her ﬂowers--especially her roses which  she prized. A member of St. Thomas’ Episcopal Church, she not only taught Sunday School, she also was an active member of the ﬂower guild. Mrs. Fleece is survived by her husband Joseph W. Fleece Jr., children Mary Jane Fleece (Jack) Cartier, Joseph W. (Jay)Fleece III, (Cynthia)and  Lindsey Fleece Henderson (Glenn) Her grand children John Curtice Cartier (Yadira),Joseph W Fleece (Jasmine), Juliet Fleece Auer(William).Jake McCartney Walters, Christopher Cartier, Danielle Cartier Wendt and Angela Dunlap(Jason). Great grandchildren : Austin.Jackson and Madeline Cartier, Charlotte Auer and Anderson and Adeline Dunlap Services will be held at St. Thomas’ Episcopal Church. 1200 Snell Isle Blvd. NE at 10:30 a.m. Saturday, September 28, The family requests instead of ﬂowers that memorials for Mrs. Fleece can be made to: St. Thomas’ Episcopal Church, 1200 Snell Isle Blvd.NE, St. Petersburg,Fl 33704,  Johns Hopkins Children’s Hospital,501 6th Ave. S. St. Petersburg, Fl. 33701, Hospice, 5771 Roosevelt Blvd, Clearwater, Florida 33706 or St. Petersburg Free Clinic,863 3rd Ave.N.,St.Petersburg,Fl. 33701.

To send flowers to the family or plant a tree in memory of Joanne Fleece, please visit Tribute Store
Saturday
28
September

Share Your Memory of
Joanne
Upload Your Memory View All Memories
Be the first to upload a memory!
Share A Memory
Send Flowers