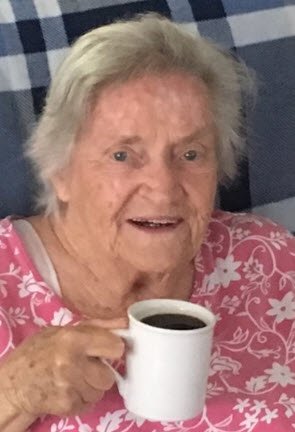 Jean was born in Cincinnati, Ohio, in 1932, the first of two children to Norbert and Louise (Nusekabel) Trapp. After graduating from high school and attending night school, Jean became a payroll clerk and secretary at Western Cabinet in Cincinnati. It was during this time that she met her future husband, Bernard “Bernie” Feldhaus.

After their wedding, Bernie and Jean moved to Kettering, Ohio, and soon after welcomed the first of seven children. During this time, Jean worked as a volunteer in several different capacities, the most notable being Camp Dakota, a program which fostered relationships between inner city and suburban youth in a summer camp setting.

In 1971, the family moved to St. Petersburg, Florida, and as her children entered high school and college, she once again began to perform volunteer work, this time at St. Raphael’s Catholic Church on Snell Isle. Within a year or so, she was hired by the church as “the other girl in the office”, and eventually became the parish secretary. She retired from St. Raphael’s after many years of dedicated service, after which she began to travel the world with her husband. Often she spoke fondly of her trips to Germany, the Holy Land, and Ireland.

Jean was a devoted wife and mother, who loved and supported her husband and children unconditionally. In her later years, her greatest joy was to be with her family to celebrate the holidays and milestones in their lives, most times sitting, listening, and smiling broadly. By the example of how she lived her life, she taught her children to care for others in need, patiently endure whatever trials they may encounter, and to believe in a good, all-powerful, and loving God.

While the family would like you to join us to celebrate the life of such a wonderful person, we understand that with the concerns of the pandemic it might be better to stay home and celebrate in your own special way.

In lieu of flowers, the family requests that donations be made in her name to Suncoast Hospice, or a charity that is meaningful to you or your family.

To send flowers to the family or plant a tree in memory of Jean Feldhaus, please visit Tribute Store
Wednesday
12
August

Share Your Memory of
Jean
Upload Your Memory View All Memories
Be the first to upload a memory!
Share A Memory
Send Flowers