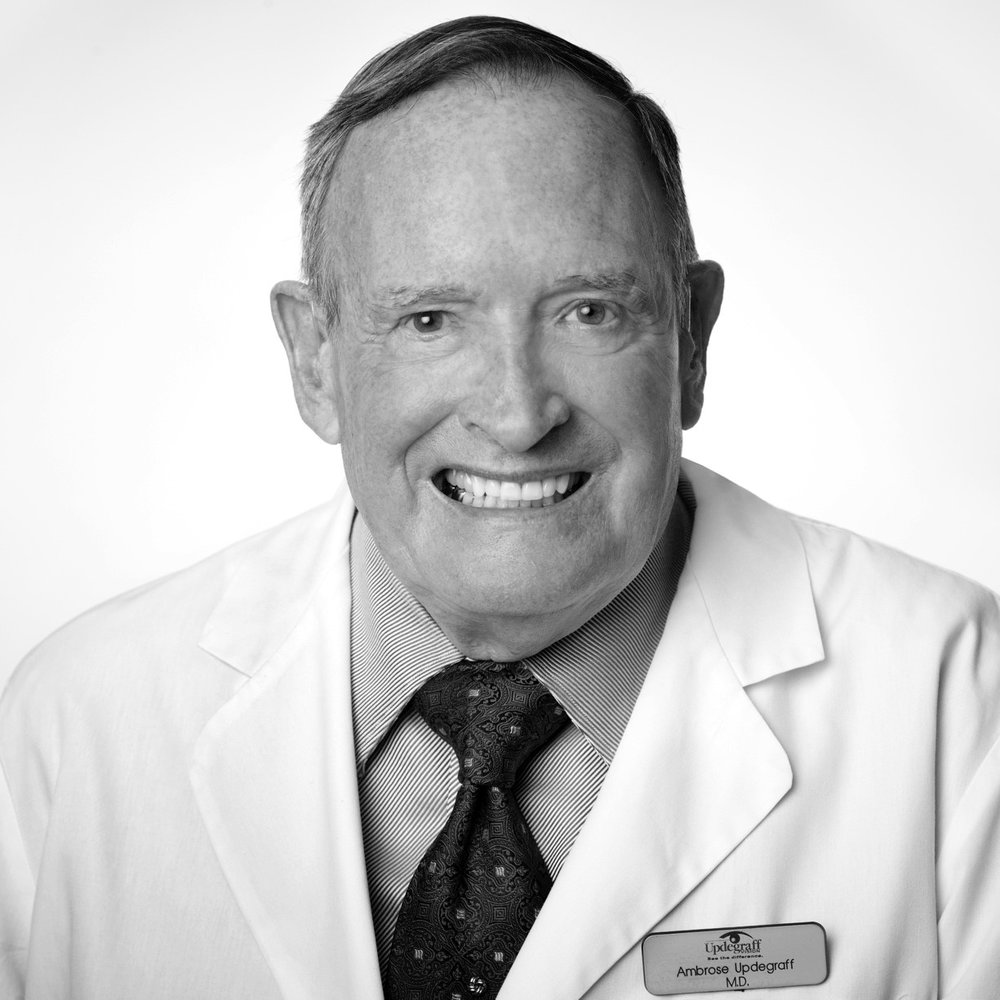 Dr. Updegraff was a true renaissance man, dedicating his life to his family, his medical practice, and exploring the arts and nature. Born on September 20, 1928 in Sigourney, Iowa, Dr. Updegraff was the youngest of four children and is survived by his brother John. A curiosity for nature and animals developed intuitively through his early life on the family farm. Ambrose later fostered a similar love for nature in his children, introducing them to the forests and wetlands that characterize central Florida through canoeing and camping adventures.

At age 17, Ambrose signed up (with his father’s consent) to join the war effort. His experience working alongside Japanese citizens healing from the war shaped his belief in peace and ignited his love of exploring different cultures. As a postwar vet, he was able to attend The University of Iowa on the GI bill and worked summers in construction with his brother John to pay for books and food. He became an accomplished stonemason, but decided to follow his passion and curiosity for Ophthalmology.  Ambrose’s father had lost eyesight from an eye injury at an early age and Ambrose had cared for a lady who had her sight restored by surgeons at the University of Iowa. Some of the brightest minds in the field fled Germany and Austria and were placed in Iowa for their safety. This created one of the most advanced eye programs in the world. Young Ambrose was absorbed and enthralled by all of it. During this time, Ambrose fell in love with Ramona Moorefield from St. Petersburg, Fl. He soon discovered the “sportsman’s paradise” that Florida was known for. It had it all: beaches, the Gulf of Mexico, hammocks, crystal clear springs, and rivers. He started his practice, Brooks Optical, in 1958 across from Mound Park Hospital - now known as Bayfront Medical Center. He was on hospital staff there and St. Anthony’s hospital. It was a collegial time and there were only a handful of doctor’s practicing in the field, which translated to many days and nights “on call” for eye emergencies.

Countless people had their vision saved due to his quick action and surgical skills. Dr. Updegraff also enjoyed pediatric strabismus surgery and was one of the first ophthalmologists operating at St. Petersburg’s first pediatric hospital, “All Children’s”. In the 1970’s his fascination with restoring patient’s vision with cataract surgery grew. He was the first ophthalmologist in St. Petersburg to use an intraocular lens and small incisions for cataract surgery, as he kept up with the rapid advancements in his field. He loved the relationships he made with patients and often managers would have him carry an egg timer in a futile effort to keep him on schedule. Caring for whole families over multiple generations was a joy to him. His commitment to the pursuit of continued learning was exemplified by his encouragement for his son Stephen to learn from the best as he followed his father’s passion for ophthalmology. As a result of this encouragement to learn and grow, Dr. Stephen Updegraff was in possession of unique skills and training when he returned to join Ambrose in practice in 1996. The pair established Updegraff Laser Vision as one the nation’s premiere Laser Eye surgery facilities. Stephen and Ambrose experienced the joy of practicing together and Ambrose marveled at the introduction of LASIK and Laser Cataract Surgery. Ambrose served over 35 years as a member of the American Academy of Ophthalmology and enjoyed attending annual meetings across the United States. He was actively involved with the Pinellas County Medical Society and Rotary International. His love for his patients and Ophthalmology kept him in practice until he retired in 2013 at the age of 84.

Alongside his professional accomplishments, Ambrose embodied a generosity and eagerness to learn that flavored every moment. He was an accomplished sportsman and enjoyed fostering an understanding for the wildlife that he encountered through these travels. The couple that were “Ramona and Ambrose” brought fun, joy and laughter to their family and friends. The couple’s fun antics were epic at the Saint Petersburg Yacht Club, where they met many of their lifelong friends. Ambrose’s civic duty to his community was strong and he was actively involved in scouting. He volunteered every year with PARC and the Nina Harris Exceptional Student Education Center to help take special needs children camping. Ambrose was a Suncoaster as well, lending his help with the yearly Festival of States parade and the battle of the bands. Ambrose was comforted by a deep faith and cherished the relationships he made through both First United Methodist and Starkey Baptist Church.

His love for Ophthalmology was only overshadowed by his love for his family. Loved by thirteen grandchildren and five great grandchildren, Ambrose never missed an opportunity to celebrate his grandchildren’s accomplishments and was a curator for the best memories of their childhoods. He thoroughly enjoyed being active with his family sailing, windsurfing, kayaking, and canoeing. Most especially, Ambrose was a romantic – penning poetry for his wife and always leading others to see the beauty in the world around them.

As his health failed, he remained passionate about art – he learned the arts of watercolor and pottery and cherished time spent painting with his daughter Katherine. His caring smile and constant twinkle in his eye earned him the moniker “Superman” from his caregivers. One of his physicians commented, “he inspires me to look at the positive things in life and go full speed ahead no matter the difficulties.” Loved by all who knew him, he will be deeply missed. In lieu of flowers, gifts may be made to the St Petersburg Free Clinic. A virtual memorial will follow at a later date.

To send flowers to the family or plant a tree in memory of Ambrose Updegraff, please visit Tribute Store