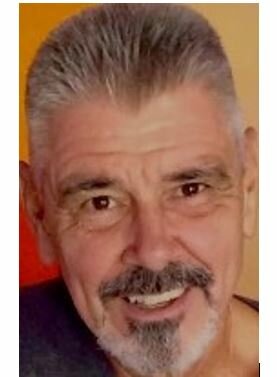 Ribits, Robert C. (Bob) was born on August 2, 1950 and died August 28, 2021.  Bob was born in Detroit, Michigan and grew up in the greater Detroit area.  He graduated in 1968 from Salesian High School, and subsequently earned a Bachelor’s degree from Michigan State University in 1973.  Bob went on to build an accomplished career in Advertising as an Art Director at several major firms.  When he retired in 2004, he moved to Florida, initially to Sarasota, and finally to St. Petersburg.

In St. Petersburg, Bob was an active member of the community. He rekindled his love for painting, and was involved in many local charities.  From feeding the homeless, to providing blankets for infants and the elderly, he generously contributed  his time, talent, and treasure to help others.  Beyond his art and his charitable work, he was a dog lover and could not resist introducing himself to both owners and pets.  In the last few years of his life, he took to bike riding and considered his participation in the “The SmartRide to Life” among his many accomplishments.

Bob was preceded in death by his parents, Julius and Mary Ann.  He is survived by his brothers, Fr. Thomas Ribits OSFS, Lawrence Ribits and his family, and Michael Ribits and his family.  A celebration of Bob’s life is being planned and details will be posted to his Facebook wall when they are finalized.