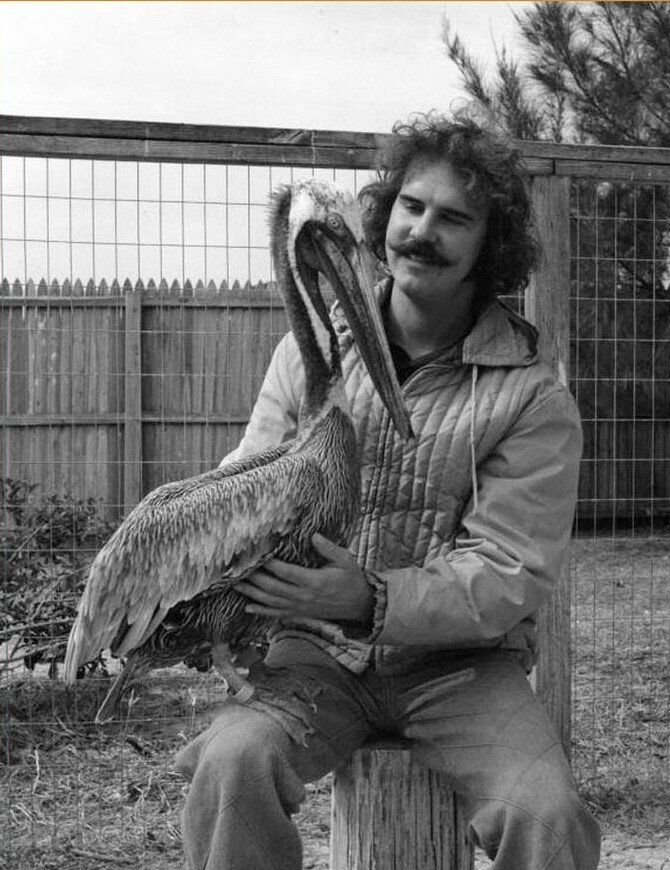 Ralph T. Heath, Jr., who founded and ran the Suncoast Seabird Sanctuary for 45 years, died October 2, 2021, after a short illness. He was 76 years old.

Born July 24, 1945, in Tampa, Florida, to a prominent surgeon, Dr. Ralph T. Heath Sr., and his wife, Helen, a schoolteacher, Ralph grew up loving animals of all kinds. As a boy, he had a goldfish which developed a tumor. With his father performing the surgery and Ralph putting the fish in and out of its bowl to breathe, the tumor was successfully removed and the fish recovered.

Ralph graduated from the University of South Florida with a pre-med degree in Zoology. Shortly thereafter, he moved to his family’s beachfront property in Redington Shores. It was here that Ralph found his calling.

While walking along Gulf Boulevard, Ralph found a Cormorant dragging a badly broken wing. He took the bird to a local vet who put a steel pin in the bird’s wing and then told Ralph, “The rest is up to you.” As word spread that he was rehabilitating an injured seabird, people began to bring him sick and injured birds from up and down the Gulf Coast. The Suncoast Seabird Sanctuary had unofficially gotten its start.

Heath not only treated birds who were brought to him but went on rescue missions whenever the phone rang. Often, he would jump out of his truck and rescue an injured snapping turtle from the middle of a busy highway or dive into someone’s swimming pool to capture a wayward alligator and release it in a safe place. He would make weekly rounds of the mangrove islands surrounding St. Pete in his jet boat, rescuing injured seabirds which had been entangled in fishing hooks and lines and left to die from starvation or exposure. The birds he rescued, some as rare as Magnificent Frigate Birds and White Pelicans, were treated at the Sanctuary in what became the largest wild bird hospital in the United States. After being rehabilitated in flight aviaries, these birds were released back to the wild. Birds whose injuries were too severe to allow for their release, lived out their days in the Sanctuary’s enclosures, complete with pools and native plantings.

Heath was credited with bringing back the Brown Pelican from the brink of extinction, as a result of DDT poisoning, by providing disabled Brown Pelicans the space to successfully hatch and fledge their young on the Sanctuary grounds. These healthy fledglings would return years later to nest and rear their own young in the trees right above the enclosures where they had been born. This helped Brown Pelican populations to significantly rebound.

A kind and loving human being, no creature was considered too small or insignificant for Heath to care for. He will be remembered by his family and friends as a lover of nature and the environment and as “the bird man of St. Petersburg, Florida.”

Ralph is survived by three sons and three grandchildren.

A visitation will begin at 11AM on Friday, October 22nd at Anderson-McQueen Funeral Home, 7820 38th Avenue North, with a funeral service to follow at 1PM. For those who wish to join at his final resting place, burial will take place October 22nd at Sylvan Abbey Memorial Park at 2:45pm.

To send flowers to the family or plant a tree in memory of Ralph Heath, Jr., please visit Tribute Store
Print
Friday
22
October