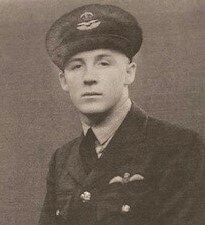 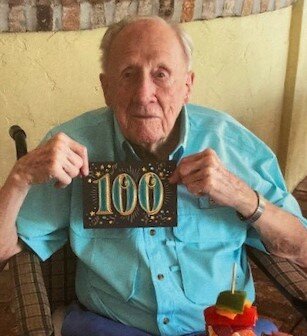 HORTON, Thomas "Tom" W., Wing Commander, Ret., passed away peacefully on December 6, 2021 just shy of 102.  Born December 29, 1919 in Masterton, New Zealand to Thomas H. and Constance E. Horton,  he aced his way through school graduating at 14 but not eligible to go to college until 16.  While working as a law clerk he obtained his license to fly at age 18,  enlisted as airman in the RNZAF in September 1939, obtained his Wings and sailed to England in 1940 joining the RNZAF there.

During WWII he was posted to No.88 Squadron in Belfast, N. Ireland  flying Fairey Battles, then  to Norfolk, England flying Bristol Blenheims and Douglas Bostons. After 31 operations he was awarded the Distinguished Flying Cross, presented personally by King George VI.   He was posted to 105 Squadron in No. 8 Group (Pathfinders) in Norfolk, England flying his favorite aircraft, a deHavilland Mosquito (light bomber).  The Mosquito was faster than a Spitfire, made of wood and had a long range.  His night time missions were to mark targets with flares for the heavy bombers and flying anti-ship patrols.  He completed another 80 operations, totaling 111.  For his bravery he was awarded a second DFC and Bar and a Distinguished Service Order,  again presented by King George VI.  Later he was to personally meet Queen Elizabeth II while she was on an official function reviewing his troupe.

After the war Tom joined the RAF flying maritime patrol missions and had various postings including to Gibraltar where he was Air Attache to Rabat, Morocco and to NATO at the Pentagon, Washington, DC.  He retired in 1966 as a Wing Commander.  (There is more on his distinguished WWII career in Wikipedia.)

He married Beris Woodruff in Norwich, Norfolk in 1943 and they had two children, Gail (Hoddinott) and Peter.  His beloved Beris predeceased him in 2011 after 68 years of marriage.  After retiring from the RAF, Tom and Beris decided to remain in the US and lived in Alexandria, Virginia where he had a successful career in real estate development.  In 2017 Tom moved to Naples, FL to live with his daughter and in 2021 they moved to St. Petersburg, FL where Tom's son lives.  He wished he could return to New Zealand but that was not to be.

He had been an avid golfer with a 7 handicap, following in his father's footsteps in NZ who was twice awarded the Amateur's Trophy Cup for NZ.  Tom and Beris enjoyed traveling and spent many winters enjoying the warm weather of Mexico, the Caribbean and Naples, FL.

He was a voracious reader and follower of politics.  He was a great dispenser of logic.  He loved being around friends to converse.  He will be so missed by his family and friends.

In lieu of flowers, donations may be made to an animal charity or your favorite charity.

Share Your Memory of
Thomas
Upload Your Memory View All Memories
Be the first to upload a memory!
Share A Memory