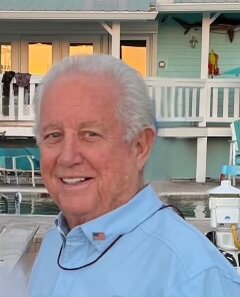 John Blair Norrie “Jack”, born March 18, 1943 of St. Petersburg, Fl. completed his work and life here on earth and transitioned to the Kingdom of Heaven on Sunday May 29, 2022 at Saint Anthony’s hospital.  Jack was born in Detroit, Michigan and resided in Michigan until moving to Florida in 1978.  Jack is survived by his wife Connie, his sisters Marty Maroudis (and Husband Craig) and Glenda Alverez.  In addition, Jack and Connie have three married children, Cara & Heri Hernandez, David & Mary Kate Norrie, and Erik & Spryng Norrie along with 10 grandchildren , Devin, Derek, Parker, Myranda, Gavin, Haley, Kayla, Taylor, Emily and Summer and 7 great grandchildren, Paisley, Braxton, Blair, Parker, Wren, Reid, and Blair.

Jack started business as an entrepreneur as a young shoe shine boy, and several paper delivery routes.  Jack had an entrepreneurial spirit and was involved in too many businesses to list from headliners to paint, to banking.  It was Jacks magnetic personality and his genuine interest in others that made him very special.  He was always interested in figuring out ways to solve problems and help people.  His attitude was always positive and he had a way of finding the best in everyone and everything he came in contact with.  His faith in God was deep and strong and it was evident in how he lived his life.   He spent lots of time alone in prayer and deep contemplation, yet always had time to be with others.  His family was his highest priority and he had a special way of making everyone feel like they were the most special one.  Jack was as genuine as they come and was always interested in what was right, pure and good.

There are a few quotes that he held dear in his life.  “Do unto others as you would have them do unto you.”  “Be kinder than necessary.” “Act as if.”” I’d rather be optimistic and wrong than pessimistic and right  “They won’t remember what you said, they won’t remember what you did, but they will remember how you made them feel.”  Jack made everyone he came into contact with feel loved and special.  Jacks magnetic personality, his wonderful smile, and his outgoing, others first, example will resonate and hopefully be emulated throughout generations to come.  The world would be a better place if there were more people like Jack Norrie.  He will be missed but never forgotten.

In lieu of flowers, memorial donations may be made to the charity of your choice in Jacks honor.

Share Your Memory of
John
Upload Your Memory View All Memories
Be the first to upload a memory!
Share A Memory