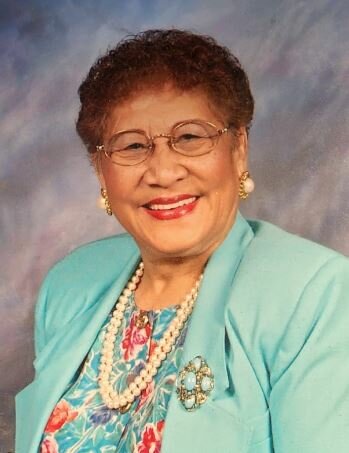 How do you sum up ninety-one years of a life well-lived on pages?  That is a tough question as well as a challenge.  Well, the only way is to start from the beginning and do the best you can.

Deloris Myrie-Gabbidon (affectionally known as Del), was born to Emmanuel Lew and Eva Samuels on June 1, 1931 on the beautiful island of Jamaica.  After a valiant battle coping with diabetes and most recently struggling with dementia, she peacefully transitioned on October 17, 2022 to begin her eternal journey with the Lord.

Her birth name was Sin Moy, but many years later, she changed it to Deloris.  Deloris spent her early childhood living with her mother in the country better known as Crooked River in Clarendon and later with her father and his family in the city of Kingston.  Her father was a shop-keeper who moved his convenience store to several locations.  As she got older, Deloris stayed in the country attending school with her younger sister, Ruby.  They had to travel many miles to school, with no transportation available.  You learned to be tough living in the country.  Before finishing school, Deloris moved back to the city of Kingston where she met her first husband, Basil.  They had four children - Winston, Denis, Beverley, and Basil Jr.

In the mid 1950’s, Deloris moved to London, England to be near her sister Ruby.  She immediately found work and held a number of positions during her 18 years in England, including a job at Kodak.  She met Donald Myrie and they had two children, Sharon and Donovan.  They lived in a cozy home in Harrow, but due to the racial unrest of the 1960’s and driven by the desire to create a better life for their family, they decided to move to the United States.

Deloris was the first to move to the U.S. in 1967 and served as a domestic worker caring for an American family, scraping up her nominal savings in her effort to bring her family to the States.  In 1969, her family joined her and they moved to Brooklyn, New York living in a one-bedroom apartment.  Upon her divorce, she moved with her children to a house on East Chester Street in Long Beach, New York.

In 1980, she married her husband, Rudolph “Rudy” who was a childhood friend.  There were so many festive parties and family gatherings in Long Beach.  No one ever went hungry when they visited Del and tasted her favorite Jamaican dishes!  Del worked for 15 years as the Payroll Administrator for Long Beach Memorial Hospital, which later closed as a result of the Hurricane Sandy devastation in 2012.  While living in Long Beach, Del pursued her life-long goal of attending school to earn a college degree.  Working in the day and attending school at night, she received an Associate of Science Degree in Accounting from Nassau Community College in 1985.

Both Rudy and Del loved living near the beach.  They were instantly attracted to St. Petersburg after visiting one of Del’s closest friends who was living there.  After building their dream home, the couple moved to St. Petersburg, Florida in 1985 and never looked back.  She became a long-time active parishioner at St. Bartholomew’s Episcopal Church.  She served on the Altar Guild for many years and was a leading force behind creating the Church’s thrift shop.   Similar to their home in Long Beach, in no time, their new home on Alhambra Way South, became a magnet for friends and family to gather in the lanai, watch the koi fish in the pond that Rudy built, and spin the classics and latest reggae tunes while dancing to the early dawn.  Del continued her work in accounting, first working at St. Anthony’s Hospital and ultimately serving as Payroll Specialist at Eckerd College where she spent seven wonderful years.  Years later after she retired, she would still look forward to getting together with the “lunch bunch” every holiday season, sharing gifts and catching up on stories of their children and grandchildren.

After retiring from Eckerd College, Del refused to slow down.  Those who knew her best described her as the “Energizer Bunny.”  She immediately dove into expanding her love for real estate after obtaining her license in 1988 and receiving her Graduate, Realtor Institute (GRI) designation.  She had always been drawn to helping people and there was no greater “high” for her than seeing the smiles on the faces of her clients at the closing table.  She enjoyed helping families find their dream homes – the way she felt about her own home on Alhambra Way South.  She worked with a number of agencies, including Coldwell Banker where she was proud to achieve recognition as the #1 member in sales in 1987.  She worked extremely hard and was committed to keeping her license active for all of her years in the business.  As her health began to fail and she needed to spend more time caring for Rudy who developed Parkinson’s and cancer, she sadly gave up a profession that she loved.  She continued to stay active by providing referrals to realtors.  Sadly, Rudy transitioned during the height of COVID-19 on August 16, 2020.  It was devastating for her to be separated from him during COVID when she couldn’t visit him in the nursing facility where he was admitted.

Del LOVED traveling throughout the United States and abroad.  And she had the perfect traveling partner in Rudy.  They joined a timeshare that allowed them to not only visit Orlando, but travel all across the world.  Some highlights included cruising to Alaska, visiting the Grand Canyon in Arizona, welcoming in the bicentennial (2000) in London, sightseeing in Paris, Hawaii and soaking up the sun rays in Aruba. They traveled to Italy for her son’s wedding, and often booked a cruise to celebrate their anniversaries throughout their 40 years of marriage.

Del also LOVED her Tampa Bay Rays.  As a member of the Council of Neighborhood Associations, once serving as Secretary and Treasurer of Lakewood Civic Association, she would often get tickets to attend local baseball games.  She and Rudy would dress from head to toe in Tampa Bay Ray gear, cheering on their favorite team!

And Del LOVED dressing to the “T”.  Her walk-in closet was filled to the brim. And when she ran out of room she moved into Rudy’s closet. And when that was filled, she moved into the guest closet, and then had Rudy create additional closet space.  She wore stylish clothes, shoes and pocketbooks to match.  She LOVED getting her manicures and pedicures done on 22nd Avenue.  Pink was her favorite color but red wasn’t so bad on occasion.

But most of all, Del LOVED being around her family.  And she enjoyed entertaining visitors.  Any excuse to pull out some crackers and cheese served with a beverage or two.  Staying for dinner?  No problem.  There was always more food in the never-ending pot on the stove.  Fresh baked banana bread anyone?  How about some ackee and saltfish with dumplings for breakfast?

Del was constantly surrounded by her children and grandchildren, and her four sisters who joined her in the United States along with their children.  It took a lot of sacrifice and hard work for her to come to this country and she tried to ensure that her family had similar opportunities to pursue their dreams.  For many of Del’s relatives, St. Petersburg became their permanent home where they still reside today.

Deloris, thank you for being our pillar of strength and encouraging us to strive for excellence.  You will forever be the matriarch of our family.  We celebrate you for all the hurdles you’ve graciously conquered and the love you instilled in this world.  We know that you are now at peace and filled with joy in the hands of the Lord.  We love you. We miss you.  You will never be forgotten.

For detailed service information, please view the hyperlink below:

To attend visitation virtually, please view the hyperlink below:

To send flowers to the family or plant a tree in memory of Deloris Gabbidon, please visit Tribute Store
Sunday
30
October

Share Your Memory of
Deloris
Upload Your Memory View All Memories
Be the first to upload a memory!
Share A Memory
Send Flowers