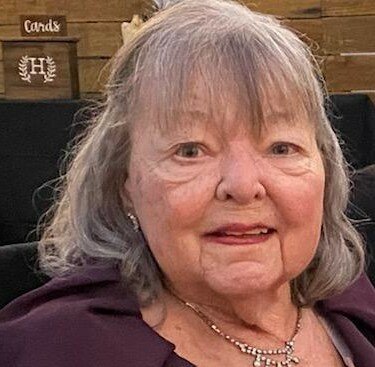 Patricia (Patsy) Hartsfield died on Saturday, December 24th, 2022, at 82 years old. She passed away in her home of over 50 years, surrounded by family caring for her as she had cared for them.

Patsy was a woman of determination and confidence.  She spoke often of the admiration she had for her mother and the love she had for her father. Patsy went to Terry Parker High School in Jacksonville, FL where she met a young man (Keith) in her neighborhood, building a boat and decided he was the one, and a short time later, in 1959, they eloped. Once married she worked as a seamstress, dictated college papers, and cared for newborn children to put her husband through school. After graduation, she ran the household and assisted her husband in running their construction company. Through life and into retirement Patsy took leadership roles in several church and community organizations. Many times, Patsy would say how lucky she was to have such a great life. I would say Patsy got everything she wanted out of life because she wouldn’t have it any other way.

Patsy was a woman of family and faith. The Church and the Christian faith took a central role in her life. She spent many hours volunteering and leading in every church in which she was a member. All her stories and advice were grounded in her beliefs and the many lessons learned from a long life of Christian service. She would say that one of her greatest accomplishments was teaching Sunday School for 21 years. There was never a doubt about what she believed and where she was going.

She cared for her children deeply and was a surrogate mother to many others. Several of her children’s childhood friends called her mom until the day she died. By the end of her life, she was a mother to 3, grandmother to 8 and great grandmother to 2. She was an unforgettable influence in all their lives.

Through everything, nothing was more important in Patsy’s life than her relationship with her late husband of 60 years, Keith. They were dedicated to each other for nearly their entire lives and have made a lasting impact on thousands of others in the process. The thought that they are now reunited gives great comfort to all who knew them.

Celebration of Life Service will be held on January 7, 2023

To send flowers to the family or plant a tree in memory of Patricia Hartsfield , please visit Tribute Store
Saturday
7
January

Share Your Memory of
Patricia
Upload Your Memory View All Memories
Be the first to upload a memory!
Share A Memory
Send Flowers