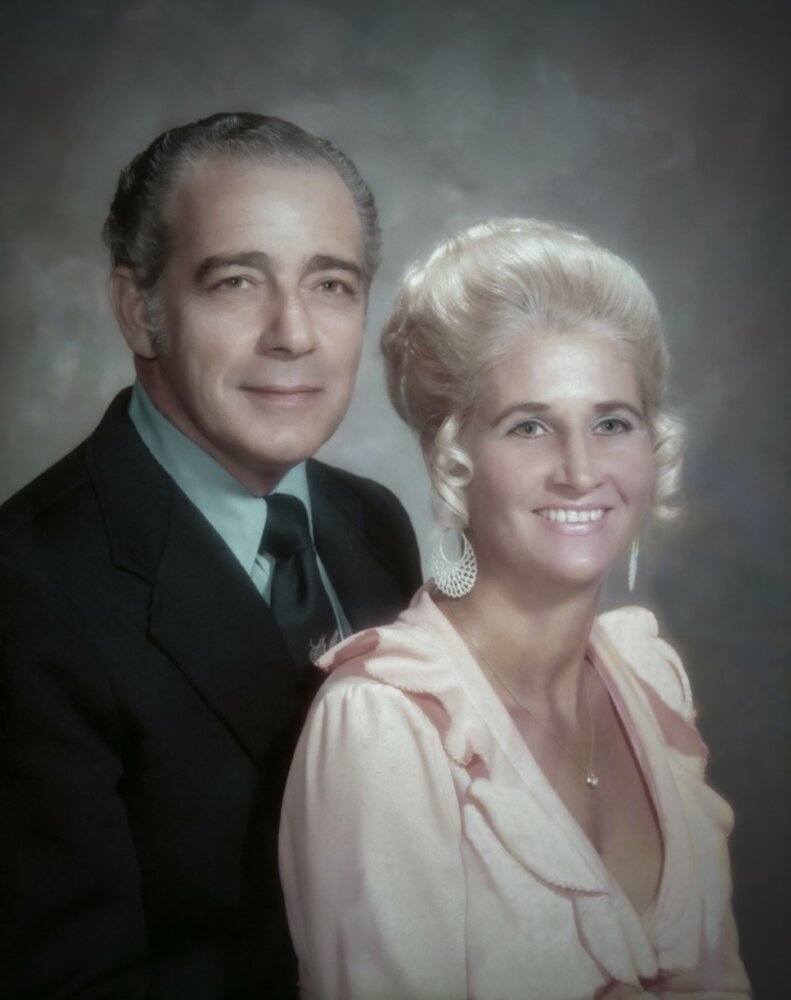 Patrick Salvatore “Pat" Macri, 99, of St Augustine passed away on Wednesday, December 14, 2022, and was reunited with his wife of 72 years, Patricia Fern (Smith) “Patty” Macri, 90, who preceded him in death on Wednesday, October 20, 2021. The two of them individually and jointly lived a life of love, honor and loyalty.  Their legacy is a tribute of the embodiment of service to God, family and country.

Pat was born in Harpersville, OH on December 3, 1923.  He was one of eight children of the late Vincenzo Rocco “Jim” Macri and Maria Giuseppa “Josephine" Asaro (Macri).  Raised in Huntington, WV, he went to work at age 15 at the Cigar Stand, a small little spot between two buildings on 3rd Ave downtown, owned by his two “uncles."  After high school, he attended Marshall University and VPI (now VA Tech). He later enlisted and served from 1943 through 1945 with the 101st Airborne Division in the European Theater.  Sergeant First Class Macri’s military service included parachuting into Normandy on D-Day and into Eindhoven, Holland in operation Market Garden.  In 1944, his unit was surrounded by the German Army in the Battle of the Bulge.  Units of the 101st Airborne Division liberated five concentration camps in the Landsberg area outside Munich. In 2004, at the memorial commemoration of the 60th anniversary of D-Day in France, Patrick was one of 100 veterans to receive the French Medal of Honor and become a Chevalier (Knight) of the French Legion of Honor.  After his military service, and using his engineering education, he worked mainly in sales of specialized steels, both in WV and later in FL. A proud Veteran, student of military and natural history, Pat enjoyed collecting memorabilia and reading autobiographies. His love of the outdoors was reflected in their retirement home in Crystal River, FL, where he tirelessly worked the land.  Together, he and Patty created meadows and fields, roads and trails, that they named after their children and grandchildren.

Patty was born in Ranger, WV on April 18, 1931.  She was one of eleven children of the late Roosevelt and Edith Smith.  After 11th grade, she attended Business School. She won the "Miss Sylvania Electric" title in 1948.  She met Pat and they married in 1949.  Together they raised their family of four children, while both working; Pat as a salesman at Southern Alloy Steel Corp and retiring in the early 90’s and Patty at Maas Bros. Dept Store until closing its doors in 1991.  She also instructed at the Pinellas County Adult Education Center, teaching upholstery and drapery.  Together, they volunteered with the Cub and Boy Scouts, Pat as Scoutmaster and Patty as Den Mother.  Pat was a member of the Knights of Columbus and Rotary.  He was a Co-founder, Charter member, President and President Emeritus of the Florida Gulf Coast Chapter of the 101st Airborne Association.  Patty also contributed immensely to the Chapter for many years.  Both were founding members of St. Raphael’s Catholic Church and School in St. Petersburg and enjoyed singing in the Choir.  Patty also served in the Women’s Auxiliary at both the Church and at St. Anthony’s Hospital. A woman of impeccable taste, Patty was an avid collector of beauty. From jewelry and clothing to furniture and decor, her collections of WV art glass, refurbished antique furniture, and treasures from her travels — all were curated and presented in a constant expression of exuberance and joy.

Pat and Patty spent their 72 years together laughing and telling stories. They loved to travel and learn new things, visiting many of our nation’s parks and heritage sites, as well as international locations throughout Europe, the Caribbean and Central America. They loved to meet new people, and both came alive in the company of others — socializing, laughing, celebrating, and always, dancing! As the years slowed down, Pat and Patty took joy in classic song-and-dance movies, nature videos, listening to music and living the porch life — sitting and relaxing while watching the water, the birds, the sky, and the seasons flow gently by — each moment filled with natural beauty and suffused with love. We are all better for their being, and blessed to have their love.

Pat and Patty were preceded in death by his and her parents; their first child, Ronald J.; his siblings: Marina, Teresa, Rosemary, Don, Joe, and Mike; and her siblings: Lois, Doris, Corbett, Donald, Clifford, Stanley and Bill.

Family and friends will gather to celebrate and honor both Pat and Patty on Saturday, January 7, 2023, at Anderson McQueen Family Tribute Center, 2201 Dr. MLK Street North, St. Petersburg for a brief visitation from 1-1:45 pm before funeral services at 1:45.  Entombment will follow services at Calvary Catholic Cemetery, Clearwater with full military honors by members of the 101st Airborne Division.

Share Your Memory of
Patrick
Upload Your Memory View All Memories
Be the first to upload a memory!
Share A Memory
Plant a Tree