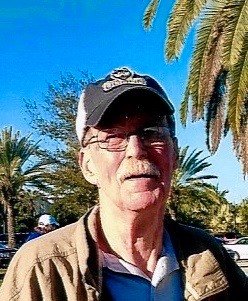 Richard Evan Staggenborg passed into the next world on October 2, 2018. Richard was born on May 27, 1944 and grew up in Tenafly, New Jersey. He attended Tenafly High School and the University of Connecticut, where he met and married his soulmate, Maureen Igoe, on October 15, 1970. He leaves behind his beloved wife, Maureen; sister, Gail Skinner of California; nieces, Kristine Evans of Georgia, Jeanne Rowe of California, Nicole Caron of St. Petersburg; nephew, Caiden Igoe of Orlando, and their families. He will be greatly missed.

Richard-Richie or Uncle Rich, as he was known to friends and his nieces and nephew-loved his community of family, friends and animals and they loved him. He was generous with his time and attention and loved visits and swapping stories. An avid reader, he devoured novels, mysteries and histories of World War II, as well as four newspapers daily.  As a result of his wide reading, Richard possessed a wide range of knowledge that served him well in conversations, discussions and as "at home contestants" of Jeopardy with his love, Maureen.

Richard was awarded The US Army Commendation Medal for "Meritorious Service in the Republic of Vietnam" during the period November 1966 to 1969. Based in Saigon, he worked for Army Intelligence where he got to know the people and culture of Vietnam and had many intense experiences that would shape his outlook on life for decades to come. He was deeply proud of this service to his country.

As a Director of Therapeutic Recreation for many years in Vernon, Connecticut, he lovingly served the elderly, bringing joy, care and fun into their lives.

Richard was one of the many privileged fans who experienced the Woodstock Festival, the apex of passion for rock 'n" roll music. His favorites included Bruce Springsteen and the Grateful Dead.

Richard will be celebrated at Anderson-McQueen on October 14, between 3-5 p.m. and at St Paul's Catholic Church on October 15 at 10:30 a.m. Interment will follow at Florida National Cemetery in Bushnell, Florida. In lieu of flowers, donations may be made to Metropolitan Ministries in Tampa: metromin.org

To send flowers to the family or plant a tree in memory of Richard Staggenborg, please visit Tribute Store
Sunday
14
October