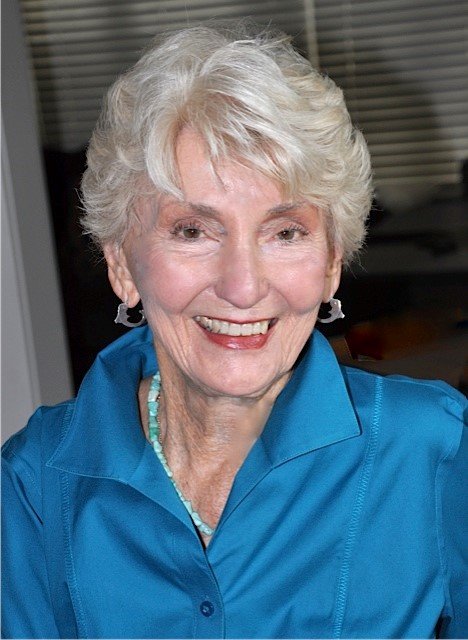 Miller, Betty Jean Schoeppe, wife, mother, grandmother, newspaper columnist and community volunteer died Oct. 17 at St. Anthony’s Hospital of complications of pneumonia. For almost 30 years, she shared stories of her family and friends in a homey column ~~ first in The Evening Independent and then The St. Petersburg Times (now The Tampa Bay Times). She also wrote stories about countless residents who contributed to the community in so many ways and feature stories that took her from experiences as varied as riding an elephant to interviewing Dan Rather. She was the darling of clubwomen and organizations who give untold volunteer hours to so many causes Betty Jean was a one woman chamber of commerce for her native city. She loved to share that she was born Aug. 14,1931 at Mound Park Hospital (now Bayfront Health) Her parents Walter C. and Elizabeth Schoeppe and older sister Mary Jane moved to the area in 1928 from Pennsylvania, Mr. Schoeppe had accepted a position with Florida Power Corp. Other than a two year stint in Pennsylvania where Florida Power Corp had transferred her father and time out for college, Betty Jean lived in the city she loved and love it she did. It was a wonderful place to grow up. During World WarII, the Sunshine City was filled with soldiers training to go to war. As a Girl Scout she collected tin cans, bought saving stamps and made scrapbooks that were sent oversees to entertain the troops., Her summer days were spent learning to sail out of the St. Petersburg Yacht Club”s Junior Sailing Center. Sundays were family days when family and friends would head first to the Florida Power Club on Sunset Beach and later on to the Tides Hotel and Bath Club on Redington Beach. The biggest event she often recalled was that World War II ended on her 14th birthday August 14, 1945 and that the biggest parade and celebration ever was held on Central Avenue. She attended local schools and was a 1949 graduate of St. Petersburg High School. It was at SPHS that she fell in love with journalism and served as the editor of the school paper the Palmetto and Pine. From high school she attended Florida State University for two years and then transferred to the University of North Carolina where she joined the staff of the Daily Tar Heel .She made her debut in 1951 at the annual Debutante Ball and was a member of the Debutante Club. She was active in her sorority Pi Beta Phi. After graduating from UNC, she came home and worked for the American Red Cross.In 1954, she married another St. Petersburg native, Thomas S. Miller. Miller had recently graduated from Washington ad Lee University and was fulfilling his military obligation in Virginia. When his active duty ended the couple came back to Florida where he enrolled in law school at the University of Florida. When Stetson University moved its law school to St. Petersburg, the Millers came back to St. Petersburg where they brought up their family ,After retirement, she and Tom enjoyed traveling and spending time on the water. For many years they rented a place at Pass-a-Grille on the beach, and they loved family vacations on Great Chebeague Island, Maine.. Betty Jean and Tom spent many a happy hour fishing. Then she would add “we loved traveling to Europe, the British Isles, Australia and New Zealand and Alaska “ Betty Jean loved her nickname of “Deenie” which she had given herself --when asked her name as a little girl she would answer “B-deenie” and for over eight decades she was called that by family and friends. Betty Jean loved bright colors - especially red. She always painted her toes red. In selecting clothes, red always won out and driving a red car was heaven to her. Her eye for fashion earned her a place on the Woman’s Service League”s “Best Groomed Hall of Fame. ”She loved her yard, her garden and her fish pond. Flower arranging was one of her passions and for years she served on the Flower Guild of her church.An active member and past president of the Stuart Society of the Museum of Fine Arts she loved participating in the organization’s annual Art In Bloom event where floral enthusiasts interpreted paintings in their arrangements. An active member of St. Thomas Episcopal Church she served on the church vestry, the flower guild and sang for many years in the church choir. Betty Jean served as president of the Town and Gown and the Nelson Poynter Library at the University of South Florida, St. Petersburg. She was predeceased by her husband Thomas S. Miller, her son Thomas S. Miller Jr., her parents Walter C. and Betty Schoeppe and her sister Mary Jane Snook. Betty Jean is survived by her daughters, Dr. Katherine Bass ( Dr.Eric) and Rebecca Slater (Rev. Canon Dr. Scott) and grandsons James Bass (Brianna) and Reid and Ben Slater , all of Baltimore, Md. Her nieces Jenny Wiedemann (Don), Hendersonville, NC and Leslie Murakami{Wayne), Scottsdale, AZ, great nieces and great nephew Elizabeth Murakami of Oakland, CA and Katherine Jane Murakami,Scottsdale,AZ and Brian Murakami, Savage, MT,Sarah Fowler Okier and daughter Lydia of Ocala and great nephew Christopher Fowler, Austin, TX. A service will be held Saturday, Oct. 26 at 10 a,m. at St. Thomas Episcopal Church, 1200 Snell Isle Blvd. NE. Memorials can be made to St. Thomas Episcopal Church ,1200 Snell Isle Blvd. NE, St. Petersburg, Fl. 33704 or to the Stuart Society of the Museum of Fine Arts, 255 Beach Drive NE, St. Petersburg Fl. 33701.

To send flowers to the family or plant a tree in memory of Betty Miller, please visit Tribute Store
Saturday
26
October

Share Your Memory of
Betty
Upload Your Memory View All Memories
Be the first to upload a memory!
Share A Memory
Send Flowers