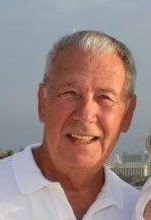 Charles “George” Wittmer, age 80, of St. Petersburg passed away on March 23, 2020. Born and raised in Cincinnati, Ohio, George attended The Ohio State University on a full football scholarship and played on the 1961 National Championship team.  He then signed with the Ottawa Rough Riders Professional Football team.

A celebration of George’s life will be held at a later date when family can gather together to remember him.

Share Your Memory of
George
Upload Your Memory View All Memories
Be the first to upload a memory!
Share A Memory
Plant a Tree