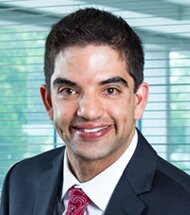 Satyen Dinesh Gandhi, Esq., 41, passed away surrounded by family on November 11, 2021. He was born February 5, 1980, in Cherry Hill, New Jersey to his dedicated parents, Kailash and Dinesh Gandhi. He was their beloved son and a first-generation American.

Satyen moved to Melbourne, Florida with his family in 1984. His mother, Kailash Gandhi, a licensed counselor, and his father, Dinesh Gandhi, a rocket scientist with NASA and the United Space Alliance, emphasized the importance of a good education and perseverance at an early age. He attended Lockmar Elementary, Hoover Middle School, and Melbourne High School where he met dear friends that remained close to his heart for his entire life. While growing up in Melbourne, Fl, and as an adult, Satyen honored his heritage by actively participating in the Indian cultural community. Satyen was recognized as an Eagle Scout by Boy Scouts of America, instilling in him the highest values of integrity and respect for others. He attended Vanderbilt University to obtain his undergraduate degree and then attended Stetson University, College of Law, where he graduated with honors in 2005. He was a member of Stetson University’s renowned Moot Court Board. It was his joy to compete in multiple national and international competitions, including the Willem C. Vis International Commercial Arbitration Competition, in Vienna, Austria, the Ruby R. Vale Interschool Corporate Moot Court Competition, and the E. Earle Zehmer Worker’s Compensation Moot Court Competition, which he won in 2004. While in law school, he found his true love, Gabrielle Osborne-Gandhi, Esq., who continues to practice law with Beytin, McLaughlin, McLaughlin, O’Hara and Bocchino, in Tampa, Florida.

Satyen was the first lawyer in his family to practice in the United States. He served as an Assistant Public Defender for the Thirteenth Judicial Circuit defending those who could not afford their own counsel. He then practiced civil and appellate law with the Ticktin Law Group, managing their Tampa office. He established his own civil litigation and trial practice firm, Carpenter Gandhi, P.L.L.C., in Tampa, Florida in 2016. Those who practiced law with him knew his brilliance, professionalism, and his unique ability to make the most effective and unexpected of arguments.

Of his many accomplishments, Satyen was most proud of being a father. He also greatly loved his two rescue dogs, Ben and Nina, but will be joining his beloved chocolate Labrador Retriever, Raja. Other than spending cherished and celebrated time with his family, Satyen, known to many as “Sat,” was a connoisseur of comic books and legos. Over the last two years of his life, Satyen bravely faced a terminal cancer diagnosis with positivity, humor, and a frank openness that inspired others to share in his journey on social media. He will be dearly missed by all who had the privilege to know him.

To send flowers to the family or plant a tree in memory of Satyen Gandhi, please visit Tribute Store
Print
Wednesday
17
November