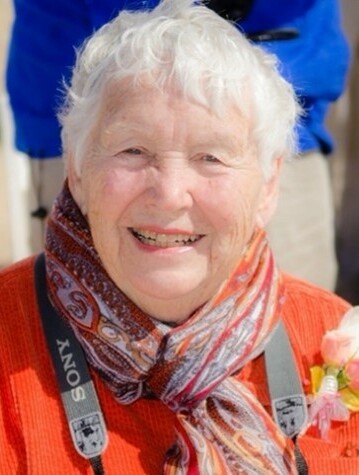 Jane States Kelly, age 92, of Saint Petersburg, FL, passed away with her three sons and other family members close at hand, after a long illness, on July 13, 2022, at Suncoast Hospice in Bayfront Hospital. Much loved and widely admired, smart and attuned to the world, she lived an adventurous life and found great happiness in her marriage to Elizabeth Joan “Betty” McLeod.

Born on July 22, 1929, in Rochester, NY, Jane Randall States was the third and youngest child and only daughter of Alida Gennifried Dunham States and Eugene Johnson States. Jane grew up in Rochester and graduated from Wellesley College, class of 1951, where she majored in Economics and was editor of Legenda, the college yearbook. After a summer in San Francisco, she moved to Bennington, Vermont, and worked in personnel for Union Carbide.  There she met, and in 1954 married, William Tolson Kelly III. They had three sons, William, John, and Patrick. Jane resigned from office work to raise her sons while Bill’s career at Union Carbide moved the family to Rocky River, Ohio, and then to Wilton, Connecticut. She was active politically, working for school integration and for women’s interests, and was an Elder in the Wilton Presbyterian Church. When her sons were in school, Jane went back to work, this time as a teacher of 8th grade English (M.A. in Education) in Norwalk, Connecticut. She and Bill divorced in 1975, and thereafter she became co-owner of a Dunhill executive placement agency.  She specialized in placing computer programmers, and then became one herself. After a few years of programming work for others, she founded JSK Programming and was self-employed for the rest of her working life.

Jane Kelly embraced change within the times of the 1960s, 1970s, and 1980s, in her working life (twice founding businesses) and even in her residence, living at times in Georgetown, CT; Rochester, NY; and Falmouth, MA. One-time president of Wilton Playshop, she loved theater.  She also loved travel; while some trips, e.g., London, combined with theater, increasingly she travelled in pursuit of nature, notably as a birder. Finding kindred spirit in the poetry of May Sarton and Mary Oliver and in the paintings of Edward Hopper, she sought freedom and solace in travel and nature, and found something more. Buying her own recreational vehicle, Jane discovered RVing Women, a support organization for women travelers, on one of her frequent road trips.  Travelling with connections made through the group, in the 1990s Jane met Betty McLeod, and Jane and Betty joined their lives on June 22, 1997. Shortly after same-sex relationships were recognized by the state of Vermont, Jane and Betty shared vows in their civil union on September 8, 2001, in Waterbury, VT. When same-sex marriages were made legal in Florida, they were married on April 11, 2015, at the United Church of Christ in The Villages. Jane and Betty shared 20 happy years. During their first eight years together, in winter they traveled the country in Big Baby, a 32-foot Bounder motor home, visiting all 48 contiguous states, plus Alaska, Canada and Mexico. Jane and Betty became frequent National Parks volunteers at Bosque del Apache National Wildlife Refuge in New Mexico, Aransas National Wildlife and Santa Anna National Wildlife Refuges in Texas. They traveled 85,000 miles, accompanied by a cat named Cody.

In 2005, they made their way to Florida to buy a new RV, but ended up with a house instead. At The Villages, they enjoyed golf and made many friends. But they found St. Petersburg more congenial, and in 2014 they moved to Westminster Suncoast, a continuing care community run by the Presbyterian Church. At her son’s barrier island residence, Jane and Betty enjoyed family holiday gatherings, quiet afternoons reading, birding, boating, and appreciating nature. Betty passed away in 2017, and Jane lived on until this year. At Westminster Suncoast, Jane was connected to a wide circle of friends, active in the book club, the chimers, the bridge club and the music appreciation group. Confident with technology, Jane kept in touch with her sons and their families through regular Zoom get-togethers, transforming Covid-era isolation into a time of frequent and warm family contact.

Jane is survived by her sons William Kelly (husband Randy Billman), John Kelly (wife Martha Kaplan, children Neil and Rose) and Patrick Kelly (wife Maria, children Patrick and Caroline).  Predeceased by her brother John Dunham States and his wife Sally Johnson States, she is survived by her brother David States and his wife Jean, and many nieces and nephews and their children.  Her life was celebrated at a gathering at Westminster Suncoast on July 16th, 2022.  Jane and Betty will be buried together at the Vermont Veterans Memorial Cemetery in Randolph Center, VT, in August 2022. Donations in memory of Jane States Kelly to The Nature Conservancy (https://www.nature.org), the Massachusetts Audubon Wellfleet Bay Wildlife Sanctuary (https://www.massaudubon.org/get-outdoors/wildlife-sanctuaries/wellfleet-bay), or the North Country Animal League (https://www.ncal.com/donate-online/) are appreciated by the family.

To send flowers to the family or plant a tree in memory of Jane Kelly, please visit Tribute Store

Share Your Memory of
Jane
Upload Your Memory View All Memories
Be the first to upload a memory!
Share A Memory
Send Flowers