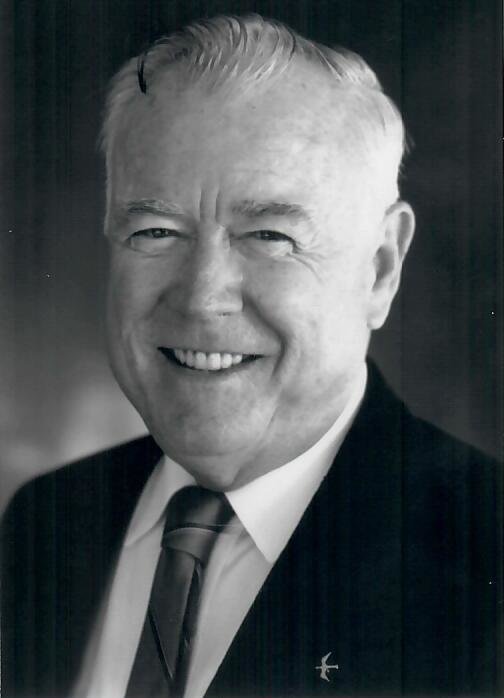 Andrew H Hines Jr. (Andy) was born in Lake City Florida and grew up in Trenton and Alachua. He received a BS degree in Mechanical Engineering with High Honors from the University of Florida in 1947. He was named a Distinguished Alumnus in 1973.

During WWII Andy served in the Army Air Forces as a navigator in B-17 bombers.  His plane was shot down over Vienna and he spent seven and a half months as a POW.  After the war he joined the Air Force Reserves and retired as a major.

In 1947, Andy married Ann Groover of Jacksonville and joined General Electric in research and development, spending four years living in the Northeast and Midwest.  In 1951, he and Ann returned home to Florida and settled in St. Petersburg where Andy went to work for Florida Power Corporation as an assistant production engineer.  Rising through the ranks, he became President of Florida Power in 1972 then, CEO and Chairman of the Board of Florida Progress Corporation.  During his career in the electric utility industry, Andy was active in many state and national trade groups, including the Edison Electric Institute where he served on the Board and the American Society of Mechanical Engineers, where he was a life member.  Upon retirement in 1990, Andy formed Triangle Consulting and served on the boards of Templeton Mutual Funds and Mutual Series Funds.  Long past retirement, Andy kept his registration as a professional engineer current attending required continuing education classes well into his late eighties.  He said, “You never know when you might need a job”.

Andy was active in civil affairs.  A few of his many civic affiliations include serving as Chairman of the United Way, Suncoasters of St Petersburg, where he was honored as Mr. Sun, the Boy Scouts where he received the Silver Beaver Award, All Children’s Hospital Trustee, St Anthony’s Hospital trustee, Tampa Bay Research Institute Chairman, Director for the Tampa Bay chapter of the Red Cross, and board member of the Florida State Fair Authority.

A big supporter of education, Andy served as a board member on the University of Florida Foundation.  He also was a past UF National Alumni Association President.  He served as Board Chair for Rollins College and as a Trustee for Florida Southern College.  He was a member of the USF St Petersburg Advisory Board and the USF Foundation.  He served 11 years as Executive in Residence at Eckerd College. He was also on the Florida Council on Economic Education.  He held honorary degrees from Stetson College of Law, Rollins College, The University of South Florida, Florida Southern College and the University of Florida.

He loved his family and boating, especially cruising on a series of boats he owned over a forty-seven-year span all named “Small World”.  He was a member of the St Petersburg Yacht Club for over 50 years.  Andy completed the “Great Loop” circumnavigating the eastern half of the US.  He cruised on his vessel to Mexico, New Orleans, and the Bahamas.  One of his favorite spots was Warderick Wells in the Exumas, Bahamas.  He loved writing poetry and published a book of his poems.  We loved to hear him whistling; it was a sure sign he was happy.

In his heart Andy remained a simple country boy from rural north Florida.  He was loved by all who came to know him.  Andy’s kindness and interest in people was genuine and many looked upon him as their mentor.  He leaves behind a legacy of the lives he touched along the way.

In lieu of flowers the family is honored to suggest donations to the following:

For on line donations see:

Share Your Memory of
Andrew
Upload Your Memory View All Memories
Be the first to upload a memory!
Share A Memory